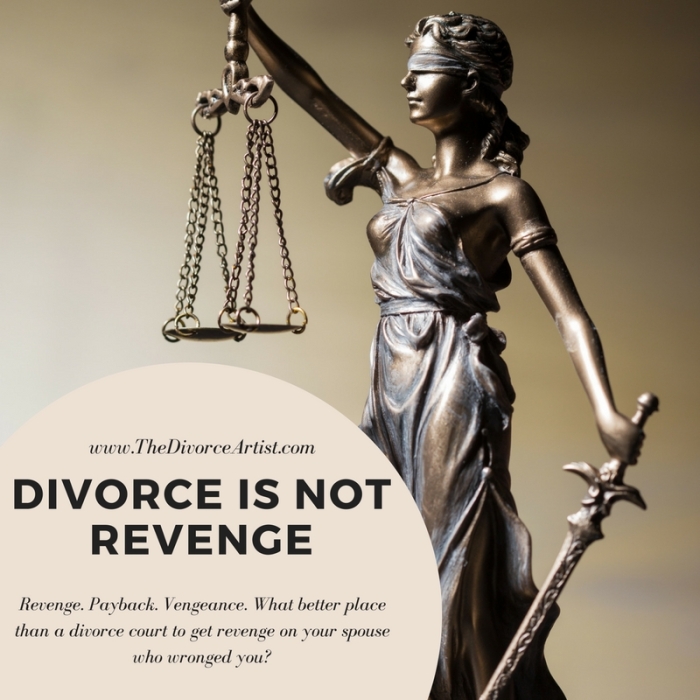 A client that I’ll call “Tanya” had a problem. Her husband was not only sleeping with her best friend, but he ran up more than $35k in credit card debt to take his affair on a trip to Thailand. Tanya was humiliated and angry. “I have done everything for him and the kids while he’s been parading around his girlfriend — my best friend — behind my back!” she said. “He needs to pay for this; I want revenge.” Revenge. Payback. Vengeance. What better place than a divorce court to get revenge on your spouse, right?

1. Revenge Hurts Your Kids. Divorce will permanently end your marriage. But if you have children — no matter their ages — then your relationship with your ex- is never really over. Your kids are tied to your spouse for life — you made that decision when you had kids together. And when you seek revenge on your spouse in divorce? You hurt your kids. But you want the kids to know that the divorce isn’t your fault! Why do they need to know the details? Maybe the divorce isn’t your fault, but it is your responsibility to handle it like an adult. Do it for your kids. Because they are capable of forming their own ideas and establishing their own opinions. Your kids are dealing with their own identity struggle because of the divorce — they don’t need you to heap your marital failures on them right now. The kids will always have a relationship with their other parent, no matter what your relationship with the other parent looks like. And trying to tamper with that relationship will often backfire: you may ruin your own relationship with the kids. Remember what Martin Luther King Jr. said: “The old law of an eye for an eye leaves everybody blind.”

2. Revenge Doesn’t Last. The idea of wiping that smug look off your soon-to-be-ex-spouse’s face sounds delightful. Yet plenty of research has been done about the human brain and revenge. Researchers have documented that while there is a rush of neural activity in the reward centers of the brain in the few moments during revenge, it is only a momentary high. Long-term, revenge extends the bad feelings of the original offense by focusing a person on the wrongs they suffered. This prevents you from healing and moving forward. Results of a study published by a social psychologist at Colgate University show that when people don’t get revenge, they are better able to trivialize the event — after all, if you didn’t act on your vengeful feelings then maybe it wasn’t that big a deal, right? But actually getting revenge? The act of revenge can make people more likely to obsess over the situation. And, again, that doesn’t allow for healing to take place. Instead, those who revenge themselves in their divorce may be stuck reliving their bad marriage — telling the same old divorce stories over and over. Who wants to live that way?

3. Divorce Cannot Be Revenge. Confucius said: “Before you embark on a journey of revenge, dig two graves.” Revenge means to inflict harm on your spouse for the wrongs that you suffered. And what could be worse than a long-drawn out and costly divorce – time taken off work, money spent on lawyers, kids forced to see experts. But that nasty divorce requires that you both participate in the process. This means that you will equally be stuck in the process with your spouse. You will be forced to deal with him or her more than you would if you managed a quick settlement. This isn’t a quick “gotcha” in the courthouse where your ex- melts into a puddle like the wicked witch. In fact, the more difficult you make things for your spouse, the longer and more painful the process becomes for you. You cannot make divorce a revenge because it harms you as much as your spouse.

4. Marital Wrongs Don’t Really Matter. Many clients tell me that they think the judge will be shocked to hear all the wrongs that have happened to them during the marriage. As if that judge hasn’t heard the same thing from everyone else coming through the courthouse doors. All states have some form of “no fault” divorce these days, meaning that the court has shifted from examining marital wrongs to just trying to help people divide up their stuff and move on. All of the grievances for which you seek retribution play almost no part in the division of your assets. Revenge in divorce has the potential of making the divorce process worse, because it opens the door for retaliation. This spirals your case into a nasty long divorce that costs a fortune in legal fees. So in your future, you will have ensured that you the most boring person at the party — rattling on and on about your evil ex-spouse — and also you will be broke.

5. Seek Boundaries, Not Revenge. Something bad happened in your relationship and you need to set firm boundaries to prevent further wrongs to yourself and maybe your kids. Drawing those new lines to prevent further distress is not revenge. Psychologists have found that there is a difference between drawing boundaries and seeking revenge. Revenge is an effort to make your spouse suffer. And while fantasizing about making him pay for his behavior might feel good, the long-term consequences of actually getting revenge hurt your ability to overcome the emotional trauma of divorce. Instead, compare that to simply setting boundaries, where you are looking to deter future bad behavior by establishing lines in the sand that cannot be crossed. Train your ex-spouse not to cross those boundaries and establish a better relationship moving forward, particularly if kids are involved.

Did your spouse try to seek revenge on you during a divorce? What was the result? Discuss in the comments.

One thought on “Divorce Is Not Revenge.”